Battery life was always an issue with high end mobile devices. That is to be expected; some 20 years ago, cell phones could only make calls and send and receive messages. However, the advent of smartphones changed all that. Now, they’re essentially small PCs that we use for everything: for photos, movies, notes, everyday correspondence. Cell phones of old could endure for up to a week (perhaps even more) without being charged. Today, you’ll be hard pressed to find someone who doesn’t need to charge his or hers smartphone every two days (and in most cases, more often). 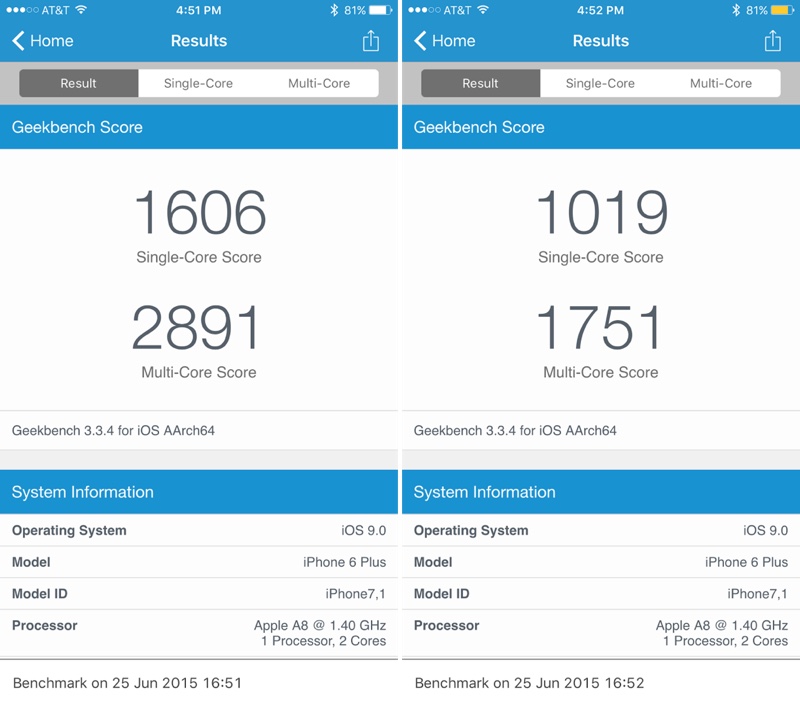 So, it should come as no surprise that Apple is introducing a special new Low Power mode that is intended to keep your phone alive as long as possible, especially when it’s low on juice. It turns on when you’re really low on power, and it can extend the smartphone’s duration well up to three hours.

Using special applications that serve to test processor performance on iPhone 6, it was determined that Low Power mode reduces CPU usage for about 40%. As a comparison, bear in mind that this on par with iPhone 5 and iPhone 5s when it comes to CPU performance. In other words, the reduction is considerable, and it is just what you need to give you on final boost to dying battery.

To quote the reposrt ad verbatim: “Results were similar on an iPhone 5s, with performance reduced by about 40 percent. We saw single/multi-core scores of 1386/2511 without Low Power mode and scores of 816/1405 with Low Power mode turned on.”

READ  Get an iOS 8 like Notification Centre with Notific8

However, bear in mind that all this tests were performed on the developer’s version of iOS 9. As development of the iOS 9 changes, the CPU performance is bound to change as well. There’s lot more to go – reliable rumors place the launch of the new iOS 9 (and possibly, the new iPhone) in September; less reliable rumors pinpoint the date to September 25.

One neat addition is that battery options are now near the top of the list of Settings, so finding it and managing it is easier than ever.

However, there might be a dark side to the Low Power mode. In Beta 1, Low Power mode issued a warning that it might reduce your device’s performance. However, in Beta 2, this warning has been dealt away with. What are we to make of it? Does the new and improved Low Power mode really leaves your performance alone, or did Apple deem that the warning wasn’t in their best interests? Further tests and user experience will show.

In the long run, it doesn’t really matter. Remember, Low Power mode is an optional feature. If you think that possible lower performance of the device is not worth the trade, you can turn it off; and vice versa, if you really need to make the phone last as long as possible, you can turn it back on again.

READ  Have a Knack for Jailbreaking? Better Get iOS 9.0.2 Fast or You’ll Be Sorry

iOS 9 has other tricks to keep your phone up and running that are simply phenomenal. For example, it uses light and proximity sensors to detect if the phone is on a surface, screen down. If it is, the screen won’t lit up when you get a notification. It’s is a weird but rather smart addition.

Additionally, you should also keep in mind the fact that you will be able to save up on the energy that your iPhone or other iOS devices are consuming by downloading one of the many Cydia tweaks that have been created with this exact purpose, before Apple goes ahead and releases the new operating system.

Thanks to this power saving techniques for iOS 9, you will be able to extend the iPhone’s battery by an hour even when Low Power mode is disabled. Do you have concerns that Low Power in iOS 9 would degrade your iPhone’s performance? Please let us know, as we would love to hear your input on this brand new feature.  We will publish new info as it comes, so stay tuned for more fresh Apple news.

Apple unveils iOS 8: Will the iOS 8 jailbreak be far behind?

Speed up the volume control animation with HUDSpeed

Get more functionality over the music app with BookSong