At this moment in time, there are numerous jailbreak apps that have the potential of shaking up the entire jailbreak community. However, not many of them live up to their true potential. Unlike those apps, a new Cydia app known by the name of PersonalAssistant will likely stir up the waters and encourage users from all around the world to give it a try.

Before anything else, it’s worth pointing out that the tweak has a total of seven tweaks put just into one, in order to grant users the best experience possible. 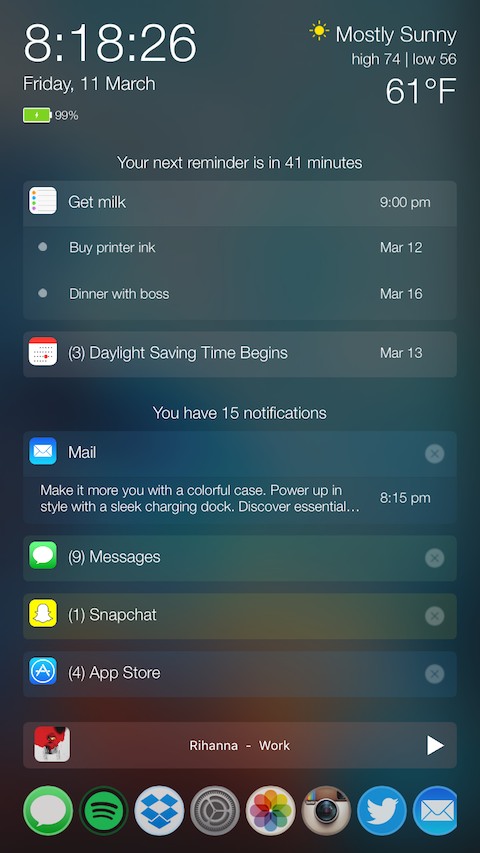 To put things better into perspective, the PersonalAssistant tweak represents a new way of observing and digesting information on your iPhone, iPad or iPod Touch. What’s even better is the fact that the app runs great on both iOS 9 and iOS 8. Based on this, anyone who has gotten a jailbreak recently should be able to run the app just fine.

The seven tweaks that have been implemented into the mother-tweak, PersonalAssistant, are named Horlogium, Auxilium, Phalanx, Forecast, Boltix, Symphonia and Acutus.

When users first install the app, they will notice that the Cydia app will modify the lockscreen and that they will be greeted with an entirely new flow of information. While the lockscreen may look overloaded at first, users should be aware of the fact that they can control the flow of information through the tweak’s settings. Another great thing worth pointing out is that the tweak can also be applied to other sections on your mobile device, including on Spotlight and in the Notification Centre.

Some of the information that you’ll be able to get through the app, directly on your lockscreen include weather conditions, upcoming reminders, date and time, battery information, upcoming events, recently-sued apps, currently-playing media, and last but not least, notifications.

Upon tapping on any of the items that are displayed, more information will load up, meant to allow you to interact with the Cydia tweak. For example, upon pressing on the clock, you will be able to either set a reminder or alarm, directly from your lockscreen, thus allowing you to save precious time. When clicking on the battery, the interface that loads up will show information about the battery’s percentage, and remaining life. Upon tapping on a notification, a new interface will load up that will provide information on the notifications that you have received.

Just like many other Cydia apps that have managed to make quite a name for themselves on the market, PersonalAssistant also comes along with an intuitive configuration panel, where users are free to tweak most of the app’s sections. Luckily, as the configuration panel is user-friendly, people only need a couple of seconds to find out where the settings that they’re looking for are. Some of the options available in the configuration panel include the possibility to enable or disable the tweak, configure a timer dim, respringing to save new settings, deciding where the tweak’s interface appears on your OS and more.

Based on everything that has been outlined so far, PersonalAssistant represents one of the must-have Cydia apps for anyone with a jailbreak who wants to get the possibility of doing significantly more with their iDevices. Have you tried PersonalAssistant out? If yes, what are your thoughts on it?

If you liked this article, make sure to continue following AllCydia for the latest news from the iOS jailbreak market.

Find out more about your apps with Flinfo

Adjust the blur and tint level of iOS 7 with Flurry

All Your Wishes Coming True: Purchasing of iOS 9-ready Tweaks in Cydia Is Finally Possible!